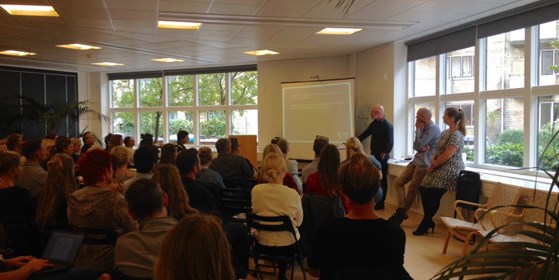 A post-launch reflection on transition as metamorphosis.

In September we were pleased to hold an event at DIGNITY in Copenhagen, formally launching our research project Legacies of Detention in Myanmar. The event was well-attended by inquisitive and highly qualified stake-holders and sparring partners and we enjoyed it immensely. Cognizant of the fact that at this point our knowledge of Myanmar is still modest we used the launch to introduce the audience to the background to the project and its intentions (as introduced via this website) and to flag the journeys that the Denmark-based team have taken – via research on prisons and reform processes in the Philippines, Uganda, Nigeria, Sierra Leone, Tunisia etc. that brought each of us to this project.

Since then Liv has begun her PhD fieldwork and Tomas and I are just about to embark on our first ever joint field trip to Myanmar. I’m excited but anxious. And I’m reminded of a blog I wrote a few years ago where I described the simultaneous feelings of trepidation and anticipation that typically accompany me when I approach the gates of a new prison (https://www.dignityinstitute.org/news-and-events/news/2014/lines-of-flight-on-the-desire-to-know-but-not-know-prisons/ ). The launch was one thing; now we are really getting down to business. This is a short duration visit and I don’t expect to be inside any prisons. It will mostly comprise meetings with partners and other stakeholders and the establishment of a clear and jointly understood platform for future collaborative activities. But it is also an opportunity to familiarise ourselves with the current socio-political climate and begin to develop a sense of how the developments of the past five years are understood locally. What is this process people are calling a transition?

The notion of transition is often used by scholars and political commentators to capture the idea of a country or a situation that is changing. It serves as a convenient short-hand for a vast array of changing political, legislative and social circumstances. A notion of transition can invoke the idea of before and after, of time on the move, of continuities and discontinuities but it may also run the risk of naively implying that change is inevitably for the better thus contributing to myths of progress.

The ethnographic sensibility that informs our research project implies that what is necessary are finely-grained, richly-detailed analyses of historical and contemporary events and the meanings attached to them by those who participate in them. Part of our task will be to try to unpack the substance and logics of convenient short-hand notions like transition in the light of empirical fieldwork and other scholarly analyses. One set of such analyses is provided by the recently published volume Metamorphosis. Studies in Social and Political Change (edited by Renaud Egreteau and Francois Robinne), which via its title and introductory chapter signals a similar desire.

The volume is inter-disciplinary and international though it springs out of a body of Francophone scholarship on Burma/Myanmar. For the editors, the choice of the term metamorphosis rather than transition is deliberate. They acknowledge the complexity of the developmental processes of social and political change that are underway and the plurality of ‘transformative powers.’ Their ambition is to emphasise what we, following anthropologist and prison scholar Lorna Rhodes, call persistence and mutation, and what they refer to as ‘deep-seated, incremental and observable transformations but with elements of resilience, if not (frustrating) persistence’ (2016: 4).

Our entry point to social and political change is the prison. Prisons are often understood to be intransigent monolithic institutions that simply endure. But our experience from other countries suggests that there are a plurality of transformative powers affecting even prisons. Prison practices are affected by legislative changes, management decisions, the whims of politicians or the winds of punitive populism and so on. They mutate and morph too. Our project aims to document ongoing mutations.

This is a professional project, of course, but it is also a personal project. At the launch event we referenced the journeys that brought us thus far and it is our expectation that this new journey will contribute to our own metamorphosis. Anthropologist Jean Lave refers to the way in which critical ethnography is about being an apprentice to one’s own changing practice, that is about learning through one’s mistakes, encounters and critical reflections. We hope – via this blog – to share what we learn along the way. And we hope you might keep reading.